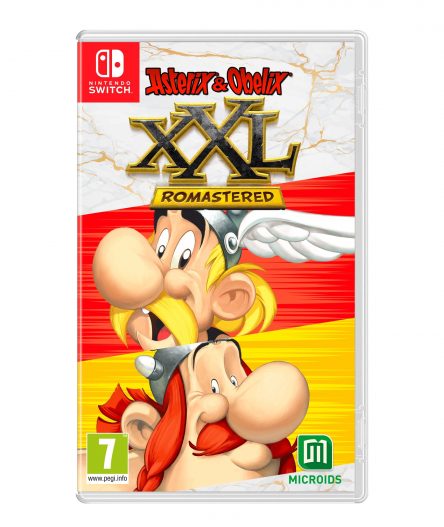 Asterix & Obelix XXL: Romastered is a timeless classic! Would you be a young wannabe Gaul or a confirmed warrior with hundreds of Roman helmets as trophies, the adventure awaits!

Time to stack on the magic potion and get ready to join the world famous Gauls in this XXL adventure!
This updated version of the game might have fallen in the magic potion! Both the graphics and the soundtrack are fully remastered and the game sees the addition of reworked animations as well as some brand new gameplay elements. This 100% «Romastered» edition surely will bring some nice surprises to all the boar hunters out there!

As per usual in the series, players will be able to switch between the two Gauls as they see fit!

On top of this global enhancement, the game is bringing 4 new game modes to the table for even more Roman slapping enjoyment:

?The «Against the Hourglass» mode for the speed lover Gauls

?The «Extreme» mode for the bravest Gauls looking for a difficult challenge

Finally, the cherry on the boar, a fourth new game mode called ”Retro” will allow to switch between the original graphics and the new remastered version with a push of a button. Try the game as if it was 2003 all over again!

For once, the famous little village didn?t resist the invader…

All the villagers have been kidnapped and are now kept prisoners all around the world by the Romans! Launch the rescue mission with Asterix, Obelix and the faithful Dogmatix and visit Normandy, Greece, Helvetia and Egypt with the necessary stop by Rome.

To free Getafix, Panacea, Cacofonix and all their friends, you?ll have to fight every enemy along the way: Romans, Pirates and even the Vikings!