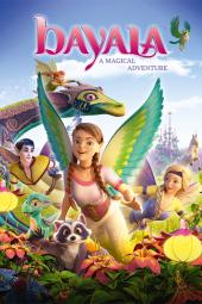 BAYALA: A MAGICAL ADVENTURE is set in the enchanted land of Bayala, where five elf tribes lived in harmony with dragons. That was until the wicked Shadow Queen Ophira (voiced by Liza Ortiz) stole all the dragon’s eggs to rob the land of its magic — and took Sun Princess Surah (Madison Mullahey) with her. Many years later Surah escapes and returns to the Sun Kingdom to be reunited with her family. But her friend Nuray (Rebecca Becker) is captured and held prisoner in the Shadow Kingdom. Surah tells of Ophira’s desire to rule all the elf kingdoms and that it’s down to her that ”wilt” has set in across the lands, killing magical plants that would otherwise be saved by dragons’ breath. When a young Sun Elf, Marween (Olivia Manning) finds a dragon egg, the elf tribes must work together to find the dragon parents, rescue Nuray and defeat Ophira, bringing peace and magic back to Bayala.